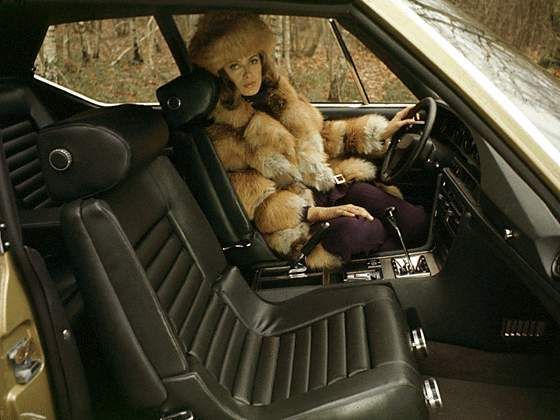 SAN FRANCISCO 1983-85: One of my favorite places to go was a place called Dancers located on Harrison and Second Street. Dancers was a large, dark place with many colored lights flashing around as an industrial-beat of music kept breeding an inescapable aura of sexuality. At least this is what it felt like after several beers.

At Dancers the libido was liberated and celebrated, and girls were dancing everywhere, including on top of the bar. And it was there that I would meet my first girlfriend, Brionna. Or something like that. Or was it Brion or Brishon? I don't remember exactly, but it began with the letter B.

Earlier I had awkwardly asked some of these girls to dance but was rejected every time. And just as I was about to become discouraged, I saw an attractive female standing near the dance floor, leaning against a pillar with her arms folded. She appeared relaxed, confident and very attractive. She looked Mediterranean with her long, curly hair that fell over her bare shoulders. Her eyes were large and brown under thick, manicured eyebrows.
But when I approached her, she too would decline my dance request. Oh yes, rejection, always. But refusing to be dismissed, I had asked her a trite follow-up question: "Do you come here often?" in the hope of receiving a more responsive answer, albeit a negative one, but anything to keep her attention.
It turned-out we had something in common: she too had worked at the Carnelian Room, and we knew some of the same people. This led to B to change her mind and dance with me. Soon thereafter she wanted to leave the club and asked me if I wanted to come along. It was an invitation I couldn't refuse.
B's car was parked under a bright street lamp. It was a Citroën, my favorite car. I was surprised to see one in the US and had never seen this particular model before. It was a Citroën SM. I was in awe and so was B: I with her car and she with me for knowing about them. Always important to impress the woman.
The nicest one I had seen in Holland was a Pallas. My friend's father had one, and drove us to a tennis tournament once at about 180 km per hour (110 mph) over a country road. The car would cut through the wind like a space ship, as its hydropneumatic suspension automatically lowered the car at higher speeds. The Citroën was one of the first aerodynamic cars, and first to have front wheel drive. And it had many other ingenious inventions, such as the swiveling headlights that simultaneously turned with the steering wheel, allowing the driver to see in advance the road he was turning into.
It was slightly past midnight when we drove off in B's car. But besides entering a new day, I felt like I was entering a new world. Instead of walking home to my basement apartment on Larkin Street or having to take a trolley bus home, I was now sitting next to a beautiful woman who was driving me down the streets of San Francisco in a Citroën. Life was beautiful.
While B's eyes were on the road, mine were on her. It seemed that with each passing moment she was becoming more beautiful as the fast bypassing streetlights on Van Ness Avenue seemed to be taking snapshots of her, as if there were paparazzi everywhere.

B was a good driver. The Citroën’s leather interior was hugging us in comfort as its Maserati engine was purring us forward. At some point B glanced over and asked me: "So, where do you want to go?" I decided to take a chance and said: "Let's go to your place."

She smiled and blushed while looking at the road ahead. Moments later a garage door rose as the Citroën dipped under it into a large pool of darkness. This night the gods were on my side.

July 27, 2019
Crescent Court Hotel, Dallas, Texas DALLAS, TEXAS -- 1985-89: Luckily, a new hotel had opened-up in Dallas, and I was able to work some banquet shifts there.  It was a 5 star hotel called The Crescent Court Hotel. Its banquet manager, Jorge, had previously worked at the Anatole Hotel as an assistant banquet manager with Charles Lorenzi.  The banquet facility at The Crescent Court Hotel was minuscule in comparison to the Anatole Hotel, but the money was much bigger. Jorge was originally from Bolivia, was medium built and had wavy black hair, which wasn’t bad for a man in his forties.  He also had a big black mustache and a very large oval head that seemed out of proportion to the rest of his body. Before the banquet commenced, Jorge was always nervous and overly serious.  But after serving the dessert and coffee, he became relaxed and charming.  And as a banquet waiter, the money was always very good and so was the employee-cafeteria food.  And I was always grateful when Jorge in
Post a Comment
Read more