During the 1980s there was a song called "Promised You A Miracle" but I always heard it as "Promised You America."
And that is where my blog received its title from.
In the previous century, after the Second World War, many Europeans sought to immigrate to the United States. America was the promised land. It was a beautiful, safe country. And a free country, there was no welfare state. The immigrants that came to America had to work to survive, there was no alternative.
My father was one such immigrant after leaving Holland after the Second World War. He worked many odd jobs until he became his own salesperson, first selling Dutch chocolate from his VW van to supermarkets in the US, and thereafter, eventually by hard work, becoming a successful fine art dealer.
One of my first jobs after arriving in America in 1983 was that of a busboy at the Bankers Club Carnelian Room. Some people might look down on that but I was looking down upon them as the restaurant was on top of the 52nd floor of the Bank of America building.  At the time, this was the highest floor in San Francisco.  The restaurant was called the Bankers Club and the entire floor belonged to them -- and so did the entire 51st floor, with private game rooms and a very large banquet room.  And every day the Bankers Club was packed for lunch.  It was a place where its members could get a quick 5 star lunch on top of the world.

At night the restaurant became the Carnelian Room and opened-up to the public for fine dining and romance.  At night the view was even more spectacular as the surrounding skyscrapers were all lit-up.  And in the far distance one could see the Golden Gate Bridge, glowing in neon orange, holding-up all the small cars struggling to and fro.  The Carnelian Room was always busy as people from all over the world came to visit.
The view of this restaurant, from behind its giant windows, was breathtaking.  It was indeed A View To A Kill as the James Bond movie filmed in San Francisco was so appropriately called. Beyond the main bar of the 52nd floor, there were also portable bars spread throughout both floors, one right by the staircase against the window. This allowed the bankers to toast the world in front of them while strolling down to the game room. Times were good during the eighties.

One day, during a large luncheon in the main banquet room, I saw Tip O’Neill, then Speaker of the House, addressing the bankers.  There was lots of laughter as Tip O’Neill, a very fat and ugly appearing man, kept talking about President Reagan, but I didn’t understand any of his jokes as I was too busy clearing empty dishes.  Strangely, all the curtains were closed during this luncheon, blocking the outside view, and I remember thinking: Who needs the outside view when one could look at a real Speaker of the House?

Another political star who visited the Bankers Club was Senator Ted Kennedy, though I didn’t recognize him at first when he was being seated in Ricardo’s section, a section right behind the maître d’ desk, at a table-for-two by the window.  The Senator was seated across from another man, and the two seemed to be having a serious discussion.  Ricardo, the fatherly waiter from Spain, whispered to me: “Do you know who that is?  That is Senator Ted Kennedy.”  When I looked again I recognized him, but his face appeared much bigger, rounder and redder than what I remembered from television and the Time magazine pictures I had seen of him when living in Holland.

As I poured Senator Kennedy a glass of ice-water, I noticed that many of the bankers were looking at him from afar, but pretending not to.  Senator Kennedy was a whale of a man and wore a shabby suit that appeared too tight for him.  He was shifty eyed and seemed uncomfortable and awkward.  At first I was excited to see him, thinking: “Less than a year in America and I’m in the presence of a Kennedy.”  But then I remember feeling somewhat disappointed.  I thought that the brother of JFK would’ve been more of a charismatic man with a happy and optimistic American style aura.  Senator Kennedy appeared quite the opposite.  I remember thinking it must have been a curse being JFK’s brother, and it looked as if it had taken a toll on Senator Kennedy.  There was something uncouth and grimy about him.  I later learned that these traits were common among all US Senators.

DIRTY HARRY
Thankfully there was a view of a large swimming pool beyond and below Senator Kennedy’s window.  Seeing this pool always cheered me up.  There was something refreshing and reviving about it.  It was on top of the Hilton Hotel in Chinatown.  This pool was made famous in the Dirty Harry movie, where in its opening scene Scorpio sharp-shoots a pretty girl to death while she’s swimming in this pool.  In the subsequent scene, Dirty Harry walks up to the rooftop of the Bank of America building, right above Ricardo’s workstation, and finds the slug from Scorpio’s sniper rifle.

Frequently, before the bankers arrived for lunch, I would stand by this window and look down on the pool and wonder what the reverse view would look like: swimming in the pool and looking up at the top of the Bank of America building.  And I would always ask myself: Would I be able to see a person behind the tinted glass where I now was standing? 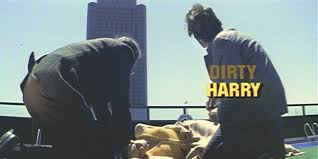 At other times, I would look farther into the distance and see tall apartment buildings in the Pacific Heights and Presidio Heights neighborhoods, so much great architectural monuments, especially when seeing the early morning shadows caste upon them.  And a little to my right was Pier 39, Alcatraz, and beyond that, on the other side, Marin County.

I always felt fortunate to be standing behind the glass of the highest floor in San Francisco, to have this luxury that few men had generations before me.  At times I viewed the Bankers Club restaurant as a giant merry-go-round.  And though I didn’t have a seat myself, I was on-board for the ride nevertheless.

Moreover, the food was incredible.  It was orchestrated by a French chef and the presentation of it seemed no less spectacular than its taste, especially to me.  In Holland I had never seen an avocado before, let alone tasted one with crab meat topped with a creamy vinaigrette house dressing or spooned chilled papaya soup out of a papaya buried in a large silver bowl with crushed ice.  I was merely a boy from the small Dutch town of Franeker from the northern province of Friesland.  But now I was eating some of the best foods in the world and had the horizon of the world around my feet.  And the way I saw it? If bussing some plates and wearing a bow-tie was part of its dues, it was a measly little price to pay. 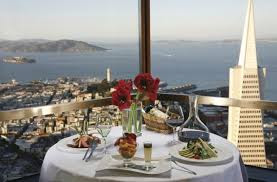 SUBSEQUENTLY: The Bankers Club Carnelian Room closed its doors after serving its last dinner on New Year’s Eve in 2009.